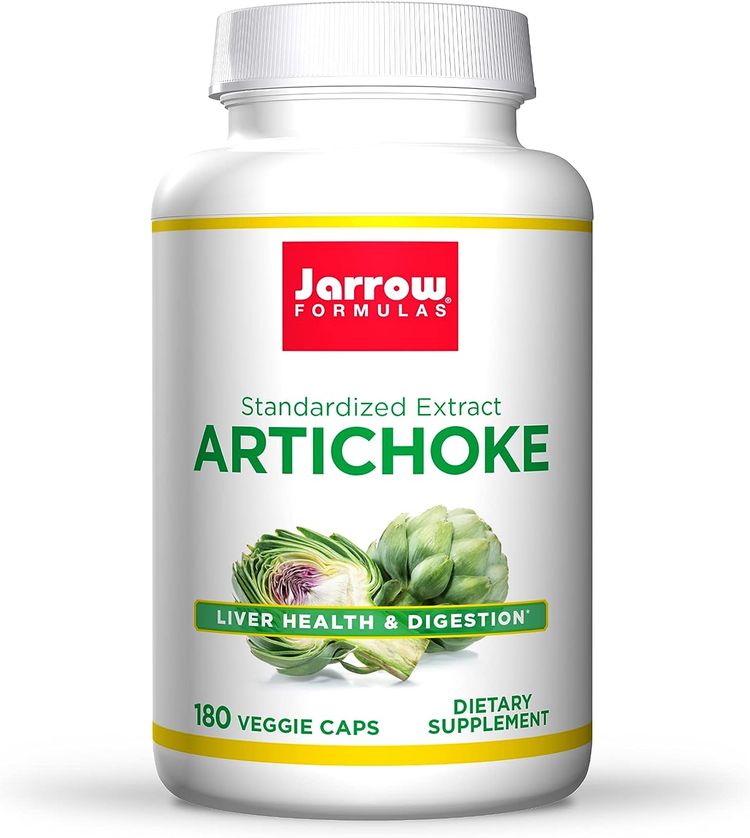 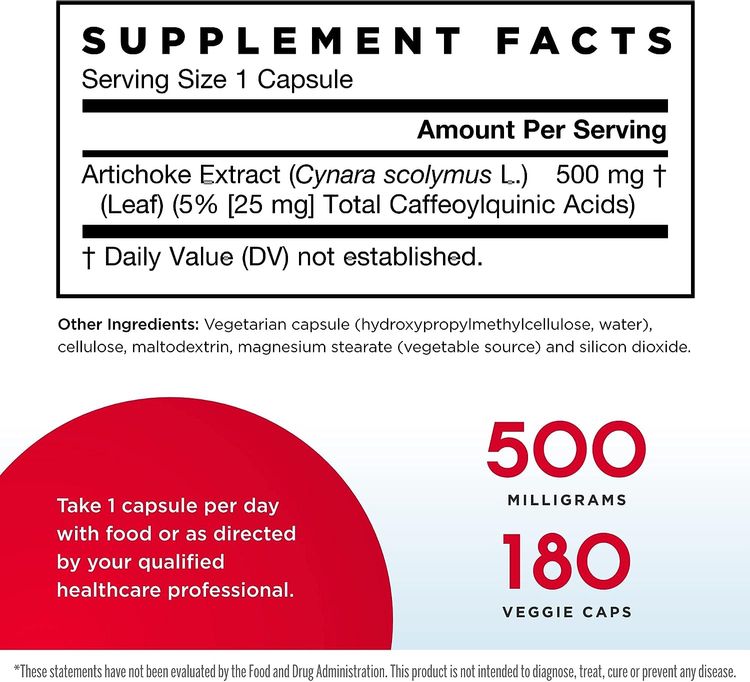 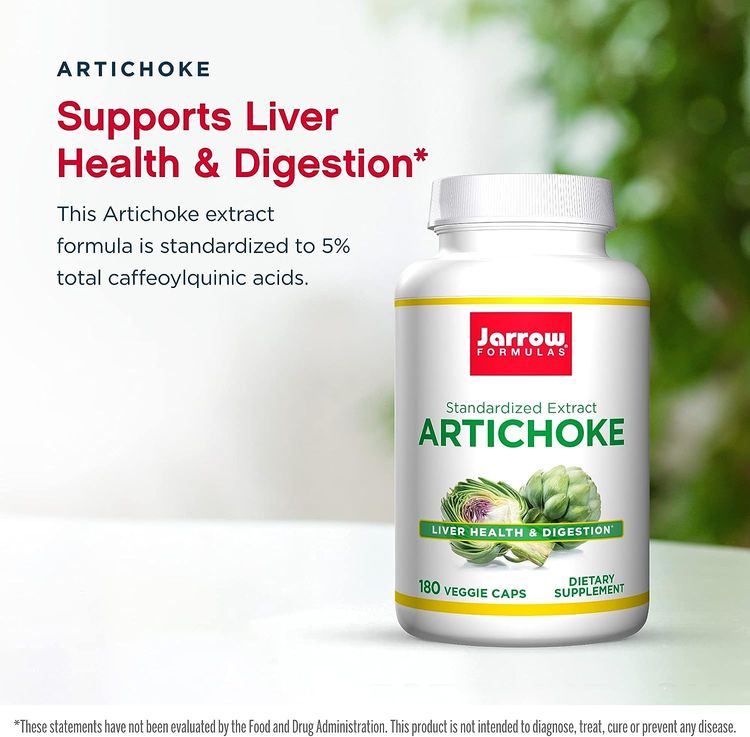 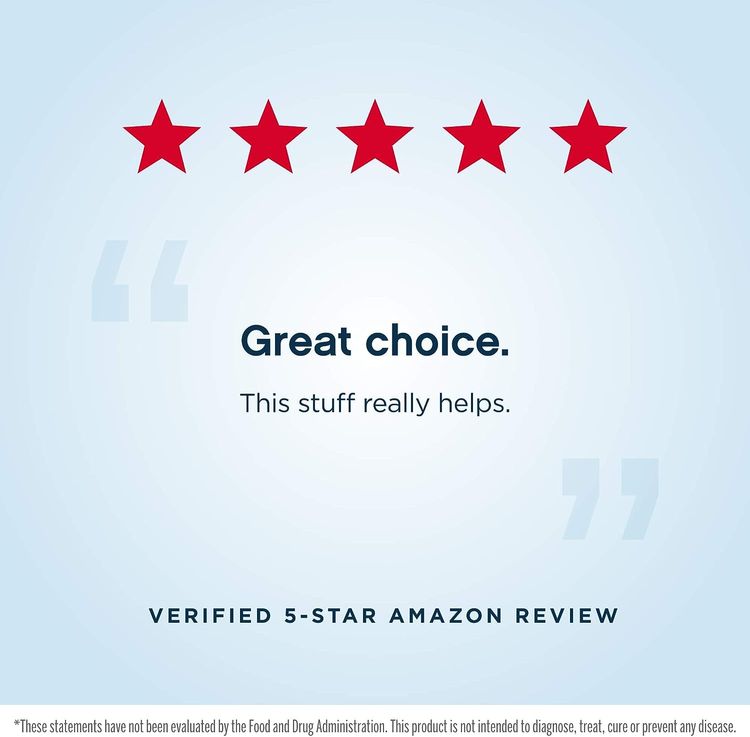 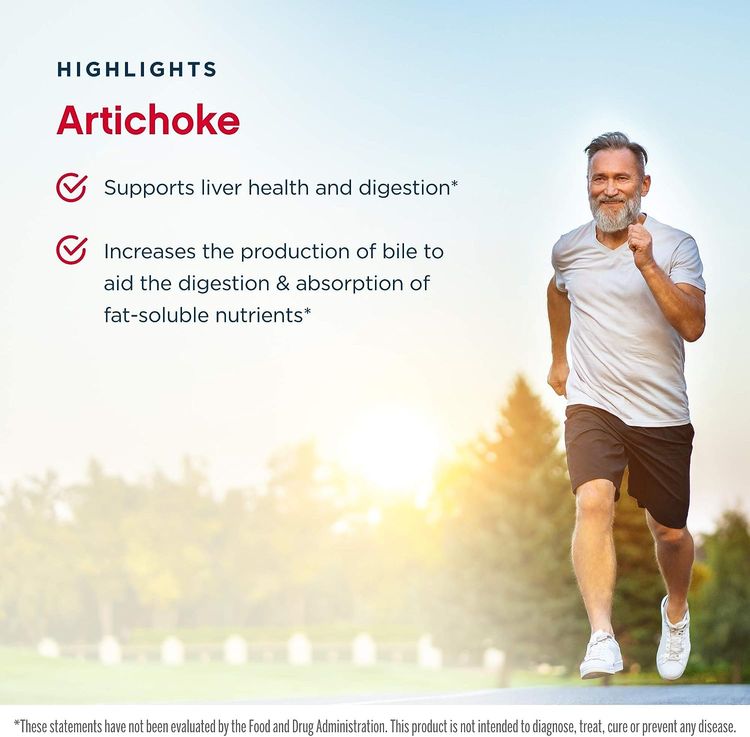 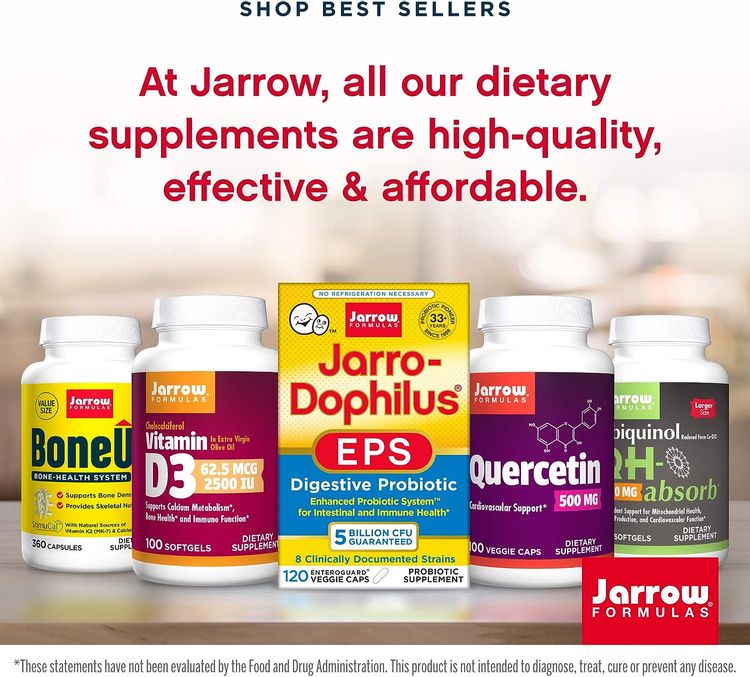 The liver is the body’s main filtration organ, a job it performs 24 hours a day, 7 days a week. It stores energy as glycogen, filters blood & digestive juices, and metabolizes &eliminates waste. Jarrow Formulas’ liver support formulas include botanical extracts, herbal formulas, supplements, and other compounds that provide nutrients to support liver function and elimination pathways, as well as aid the body’s defenses against oxidative stress.*

Originating in the Mediterranean region, the artichoke (Cynara cardunculus var. scolymus) is now cultivated around the globe. The botanical name is derived partly from the tradition of using ashes (Latin: cineris) as fertilizer and partly from the Greek skolymos, meaning ‘‘thistle’’. The immature buds of the plant consist of the edible bracts (commonly called leaves), which compose the “heart” and surround the immature florets, commonly called the “choke. ” The globe artichoke has been highlighted in traditional-medicine philosophies as a promoter of digestion and a supporter of liver and gallbladder function.* It is known to contain a wide array of bioactive components including luteolin, cynaroside (luteolin-7-O-glucoside), apigenin, inulin, and the caffeoylquinic acids such as chlorogenic acid and cynarin. In fact, many signs point to artichoke’s health benefits resulting from the confluence of many actives rather than the effects of just one. Modern biomedical science continues to decipher artichoke wisdom in many areas of health such as liver support, bile production, and cardiovascular strength.*

Artichoke is commonly touted as a stimulator of bile production. And according to in vitro studies using rat liver tissue and hepatocytes, artichoke leaf extract does indeed support bile flow.* In animals, artichoke leaf extract has been found to support the production of bile acids and to aid in the digestion of lipids.* Bile is integral to digestion and the metabolic action of bile on cholesterol metabolism has been suggested to be the possible rational for the use of bile in ameliorating occasional digestive complaints.* Yet bile production occurs in the liver so it may not be a surprise that the liver is often broadly mentioned as a beneficiary of artichoke’s effects.

The action of artichoke on the liver begins with bile, but it certainly doesn’t end there. Artichoke extracts help to protect the liver from various toxic assaults such as peroxides and carbon tetrachloride.* Artichoke’s benefits on liver are often attributed to the antioxidant activity of the caffeoylquinic acid phenolic compounds and flavonoids such as luteolin and apigenin. In vitro and in vivo studies have confirmed an antioxidant-related mechanism of protection.* Artichoke extract appears to be able to bulwark glutathione levels in the liver, when exposed to oxidative stress.* Downstream, glutathione depletion often leads to the increased peroxidation of lipids, including LDL.

As mentioned above, artichoke can stimulate bile production, which is critical to cholesterol metabolism and excretion.* However, it appears that the benefits of artichoke extend past that of mere bile stimulator. Aside from well-known antioxidants, like chlorogenic acid (a. k.a. 3-O-caffeoylquinic acid), artichoke also contains the flavonoid luteolin. There is accumulating evidence that artichoke’s effects on cholesterol health may be due to luteolin.* Nonetheless, there is solid data demonstrating chlorogenic acid’s role in lipid metabolism too.

Other research suggests that artichoke leaf extract may exhibit support to cardiovascular function via regulation of the endothelial nitric oxide synthase (eNOS) gene.* This gene is involved in the production of nitric oxide and is intimately related to the health of blood vessels and their durability.

*These statements have not been evaluated by the Food and Drug Administration. This product is not intended to diagnose, treat, cure, or prevent any disease.

NOT to be used by individuals who are allergic to artichoke, pregnant or lactating. Individuals with gall bladder or bile duct blockages should not use artichoke extract. Keep out of the reach of children. . This product is labelled to United States standards and may differ from similar products sold elsewhere in its ingredients, labeling and allergen warnings

Take 1 capsule per day with food, or as directed by your qualified health care consultant.

* These statements have not been evaluated by the Food and Drug Administration. This product is not intended to diagnose, treat, cure or prevent any disease. ** Always refer to the manufacturer’s label on the product for description, recommended dose and precautions.

Statements regarding dietary supplements have not been evaluated by the FDA and are not intended to diagnose, treat, cure, or prevent any disease or health condition.

Products related to this item
Sponsored

4.6 out of 5 stars
4.6 out of 5
1,372 global ratings
How are ratings calculated?
To calculate the overall star rating and percentage breakdown by star, we don’t use a simple average. Instead, our system considers things like how recent a review is and if the reviewer bought the item on Amazon. It also analyzes reviews to verify trustworthiness.
Top reviews

Top reviews from the United States

Lynn A. Gould
5.0 out of 5 starsRecently helped heal longterm (2 yr) severe pancreatitis(along with other …

Reviewed in the United States on September 21, 2019

Verified Purchase
This stuff really helps lower bad cholesterol levels. I take 1 a day. In addition I swapped out fast food burgers for salads at Macs and Wendy’s. What surprised me was how fast this pill worked. In one month dropped 80 points. Not a miracle but a fantastic help! Better than expensive drugs with side effects. I’m not a doctor but I’d give it a try just do research if you take other drugs. Interactions are possible when taking multiple meds and supplements. The pharmacist is always a good person to start with.
Read more
30 people found this helpful
Helpful
Report abuse
LBocchio
5.0 out of 5 starsQuick and effective

Verified Purchase
I take some anti-inflammatory medication that affects my liver so doctors use bloodwork to monitor my liver functions every month. Two months ago, both indicators almost doubled showing certain degree of liver damage. Since my doctors were considering lowering the dosage of medication in case my transaminases levels continued to increase I decided to try these artichoke capsules as well as some graviola capsules recommended by naturalistic medicine to protect the liver from toxines. The monthly tests show a steady improvement of my liver function, with one of the transminases already within the normal levels and the other one approaching the desired target level. I asked my rheumatologist today if such a quick improvement is usual in cases similar to mine and he said that even a drastic change on diet doesn’t have this kind of positive effect. When I told him that the only change I made was to start taking these pills, he got very interested and encouraged me to keep taking these supplements.
Read more
166 people found this helpful
Helpful
Report abuse
joseph conway
5.0 out of 5 starsThis is a great product, you have to take it daily and …

Verified Purchase
This is a great product, you have to take it daily and give it several months to take effect. After checking my cholesterol 12 months after starting this supplement my cholesterol dropped 30pts from 218 to 188! I have genetically high cholesterol, not diet related and am skinny, many doctors were surprised to learn my TC was over 200…..and it’s so inexpensive.
Read more
62 people found this helpful
Helpful
Report abuse
SJ
5.0 out of 5 starsI use this with Lions Mane Mushroom as a morning …

Verified Purchase
I use this with Lions Mane Mushroom as a morning elixer to wake up my brain instead of coffee. It works. When I use it, I feel more alert, sharper and just clear-headed. When I don’t use it, I can notice the difference quite readily. I get the Lion’s Mane from Mushroom Harvest, which sells both on and off of Amazon.
Read more
44 people found this helpful
Helpful
Report abuse
leslie
5.0 out of 5 starsAmazing product that works fast

Verified Purchase
For 8 years I have suffered from microscopic colitis and have never had any relief from it until now. In just two days all my issues were completely cleared up. I would highly recommend this for anyone suffering from any type of IBS!
Read more
21 people found this helpful
Helpful
Report abuse
N B
5.0 out of 5 starsI started taking this with forskolin when I had cAMP …

Verified Purchase
I started taking this with forskolin when I had cAMP deficiency and was peeing nonstop all night. Fixed it right away and I was able to sleep through the night again. After a few weeks I didn’t need it anymore.
Read more
34 people found this helpful
Helpful
Report abuse
DragonLady
1.0 out of 5 starsContains corn!

Reviewed in the United States on December 7, 2019

Verified Purchase
Contains corn Maltodextrin! I didn’t realize it had Maltodextrin because in a question someone listed the ingredients and it was incorrect. They didn’t list the Maltodextrin unfortunately. We are allergic to corn, so cannot have Maltodextrin, in addition pretty much all corn is unhealthy GMO, which I don’t want to put in my body on a daily basis. I’m going to have to throw out this product and waste the money. Ugh! So frustrating!
Read more
13 people found this helpful
Helpful
Report abuse

Top reviews from other countries

Translate all reviews to English
Emmanuel
1.0 out of 5 stars6 months after and LDL bad cholesterol increase

Verified Purchase
This Artichoke did not work to lower my bad cholesterol, it actually made it worse. I took 1 pill per day and diligently, 500mg after dinner. LDL Cholesterol test result by a few points and the HDL dropped which is opposite of what was expected. I proactively ordered a refill right before the test and will be returning it, hopefully it doesn’t become a hassle to return. We will see but overall I Do not recommend this product at all.
Read more
Report abuse
Rowie
5.0 out of 5 starsとても良いなサプリメントです。ガンにも効くかも。

Disclaimer: While we work to ensure that product information is correct, on occasion manufacturers may alter their ingredient lists. Actual product packaging and materials may contain more and/or different information than that shown on our Web site. We recommend that you do not solely rely on the information presented and that you always read labels, warnings, and directions before using or consuming a product. For additional information about a product, please contact the manufacturer. Content on this site is for reference purposes and is not intended to substitute for advice given by a physician, pharmacist, or other licensed health-care professional. You should not use this information as self-diagnosis or for treating a health problem or disease. Contact your health-care provider immediately if you suspect that you have a medical problem. Information and statements regarding dietary supplements have not been evaluated by the Food and Drug Administration and are not intended to diagnose, treat, cure, or prevent any disease or health condition. Amazon.com assumes no liability for inaccuracies or misstatements about products.