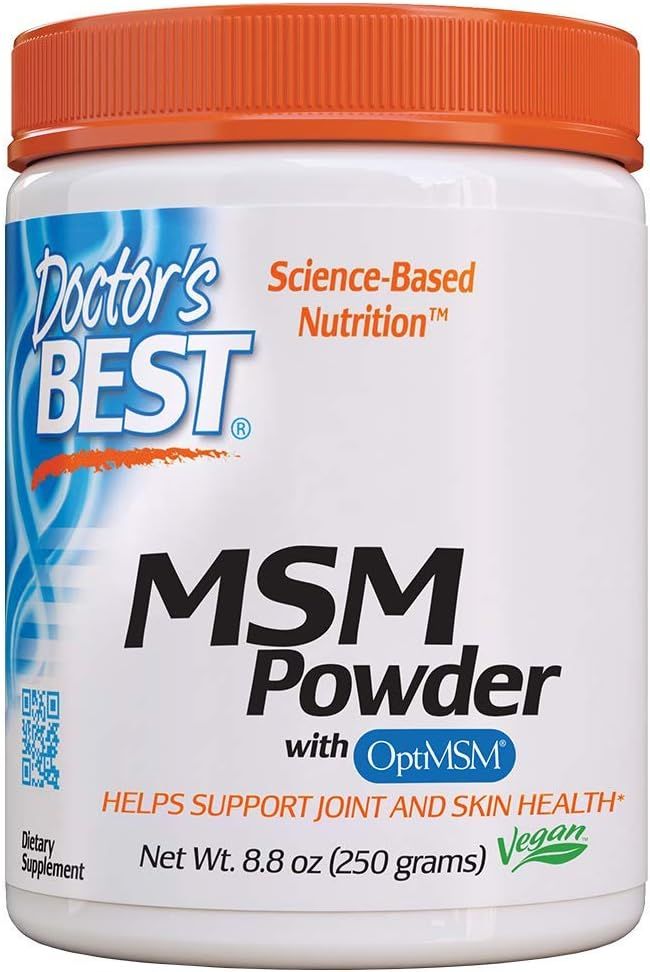 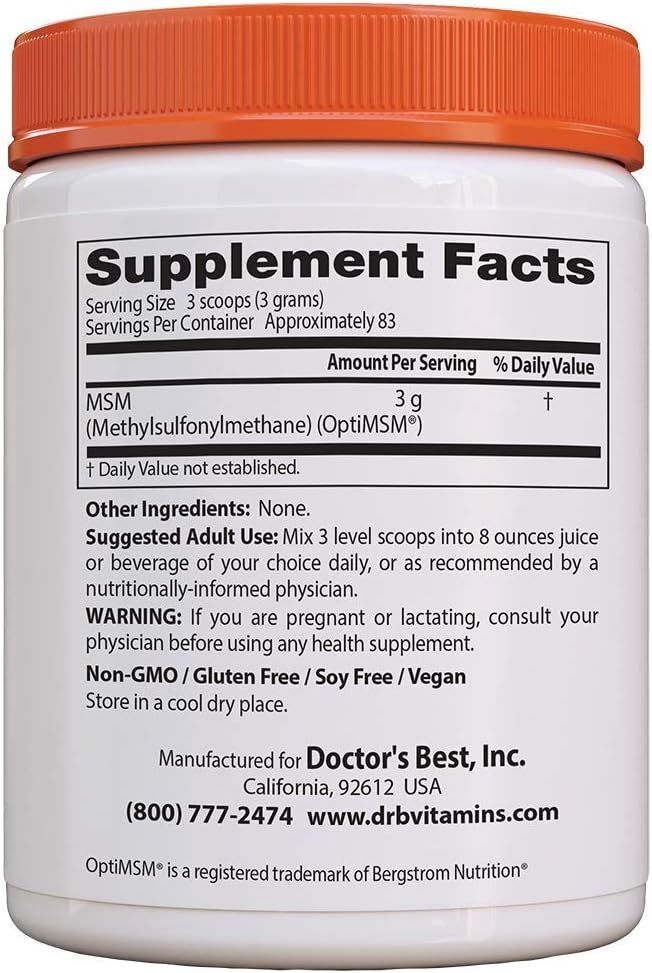 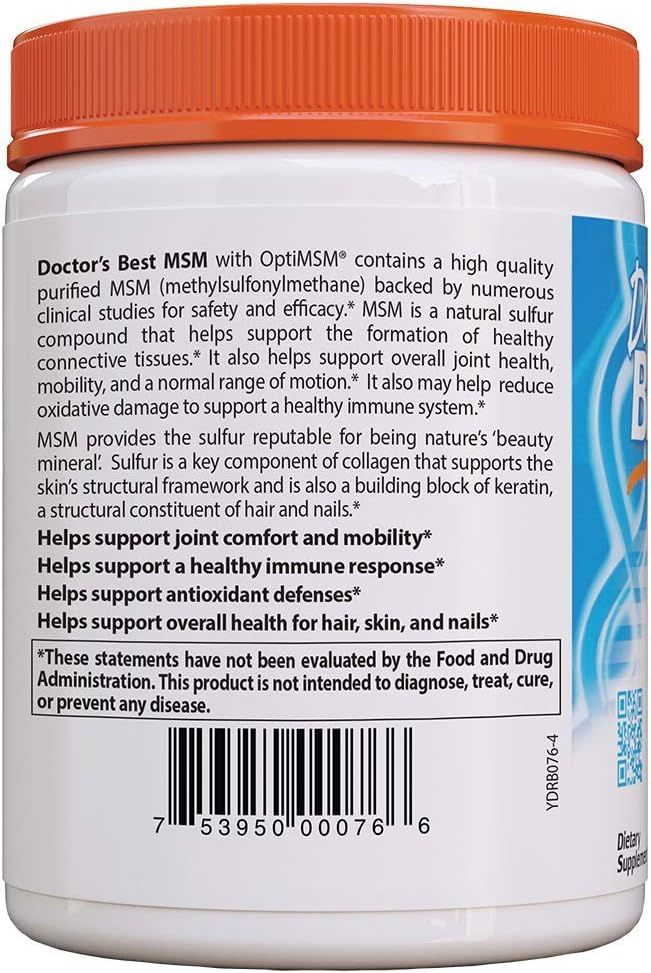 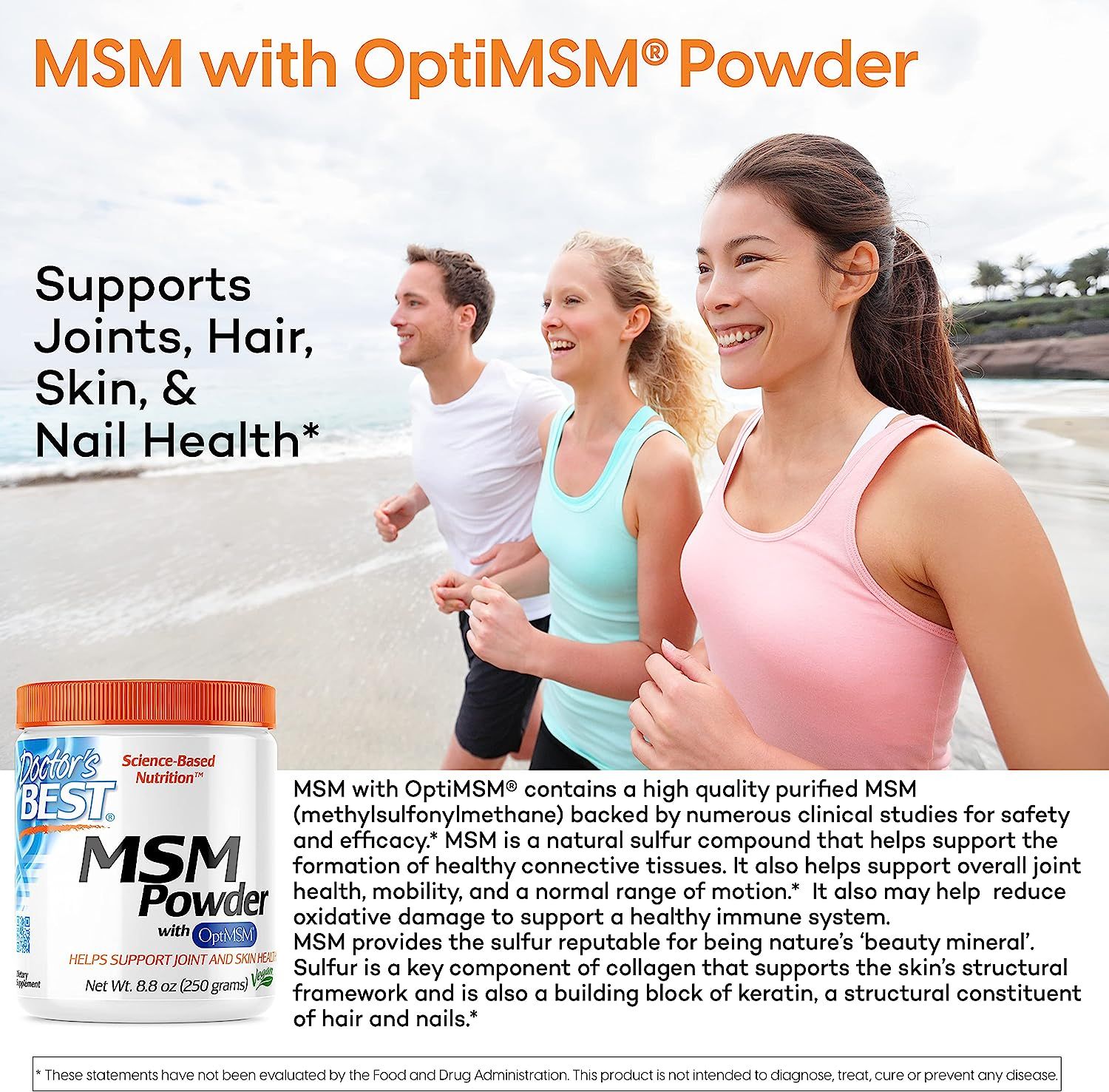 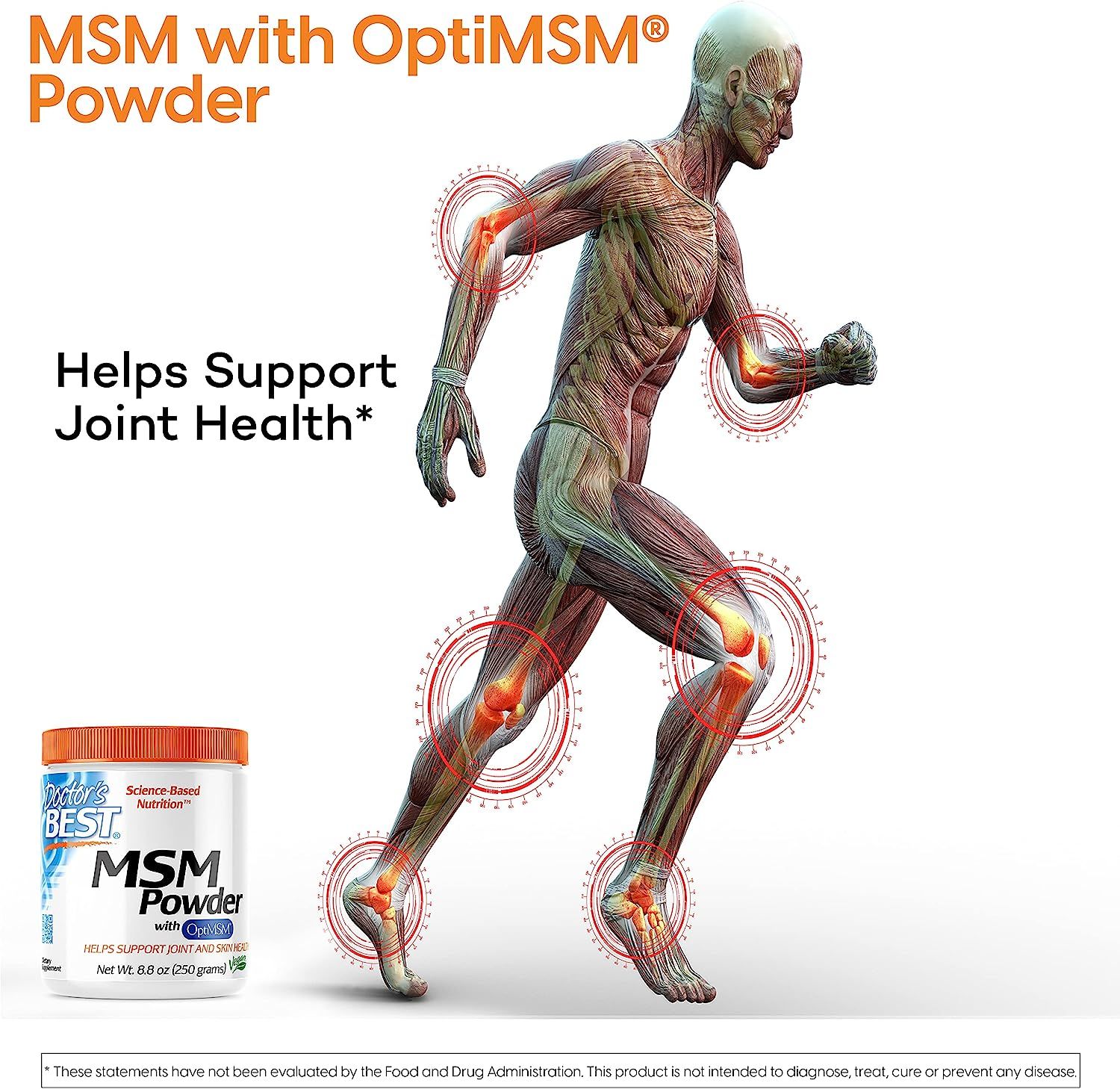 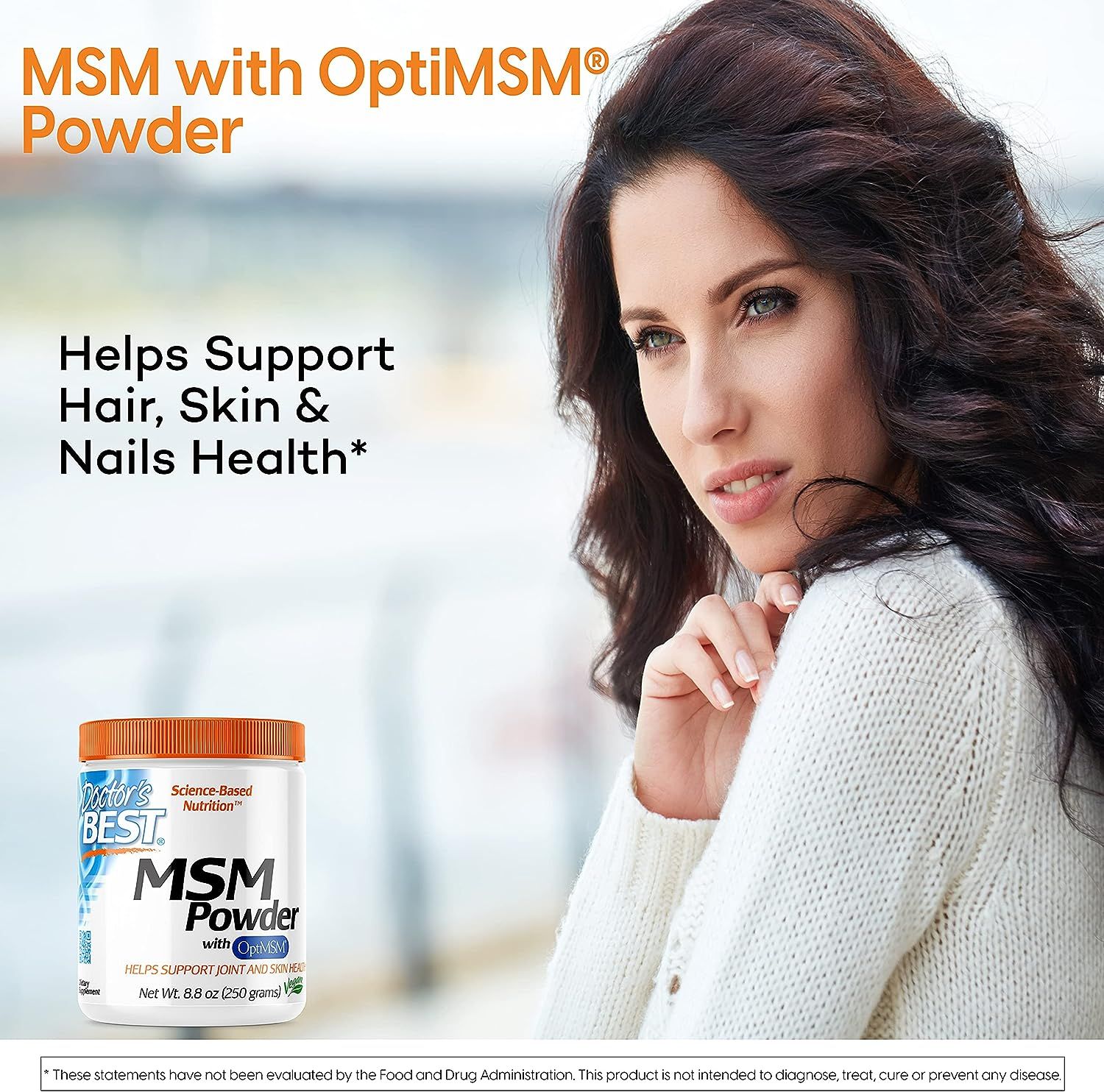 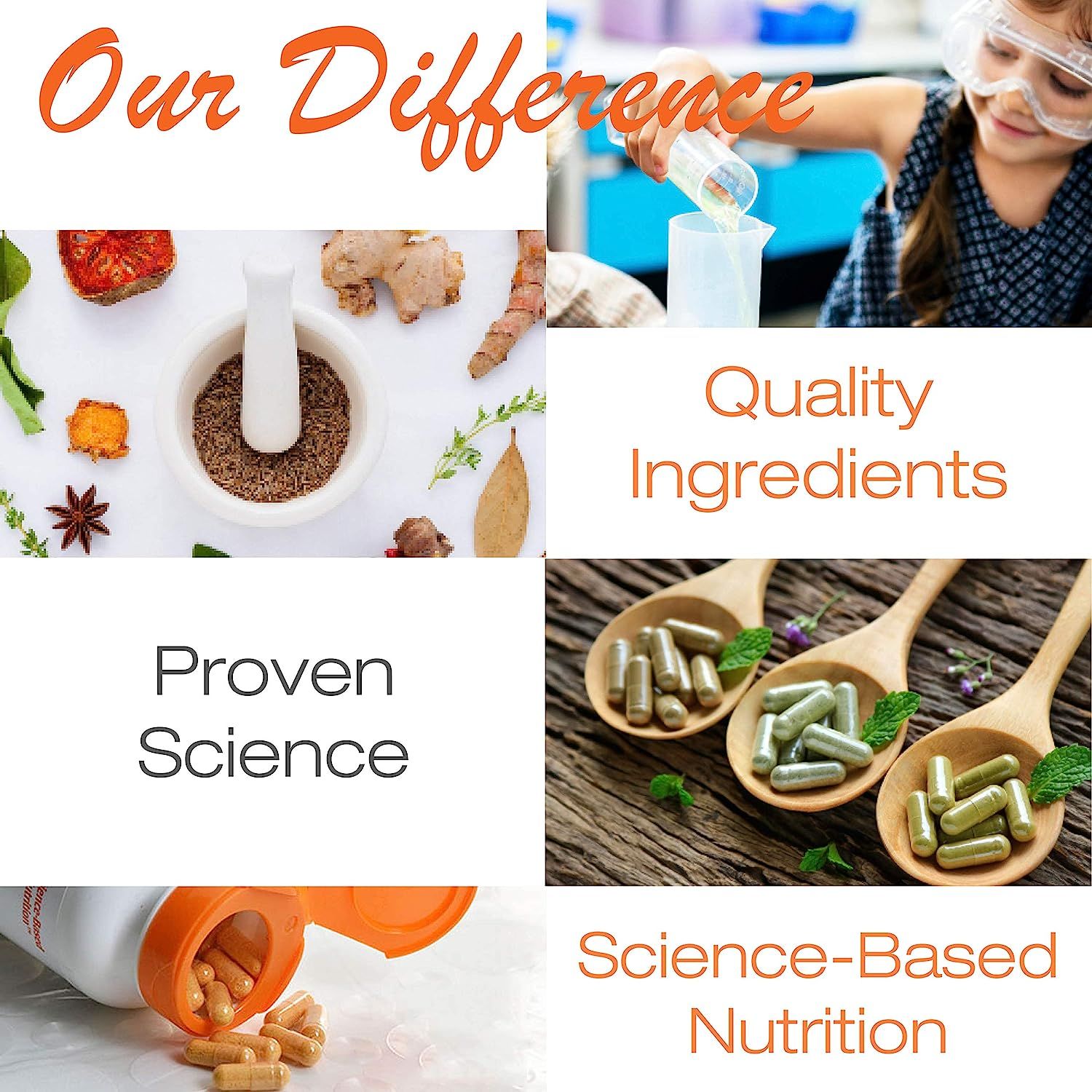 * These statements have not been evaluated by the Food and Drug Administration. This product is not intended to diagnose, treat, cure, or prevent any disease.

MSM is a natural sulfur compound that helps support the formation of tissues. It also helps support overall joints, mobility, and a normal range of motion.* It also may help reduce oxidative damage to support a immune system.

MSM provides the sulfur reputable for being nature’s ‘beauty mineral’. Sulfur is a key component of collagen that supports the skin’s structural framework and is also a building block of keratin, a structural constituent of hair and nails.*

In a double blind, placebo-controlled trial, 50 men and women were randomized to receive either 3,375 mg (3.375 grams) of MSM or a placebo daily for 12 weeks.7 Participants were instructed to take the tablets (each was 1.125 grams) in three doses per day with food, and to avoid taking the tablets before bed. Several validated and reliable scoring methods were used to measure joint function and comfort during the study. Compared with placebo, MSM was shown to significantly promote joint function and comfort, without side effects.

A larger dose was used in a randomized, double blind, placebo-controlled trial of 50 men and women (ages 40–76).8 Participants were randomized into two groups to receive either placebo capsules or OptiMSM in 1 gram capsules for 12 weeks. They were instructed to ramp up to the eventual dose of 6 grams per day by starting with two doses of 2 grams per day for 3 days, followed by an increase to 4 grams per day for the next 4 days. At the beginning of the second week, the dose was raised to 3 grams twice daily. Participants were instructed to take the MSM with food, and to avoid taking it at bedtime. Knee joint function and comfort were measured by standardized (reliable and valid) questionnaires. After 12 weeks, physical function and knee joint comfort were shown to be superior in the MSM group when compared to placebo.

In a more complex double blind study, MSM was tested versus (a) a placebo, (b) glucosamine, and (c) a combination of MSM with glucosamine, in 118 men and women (ages 40–70).9 Participants were randomized into four groups to receive either a placebo, MSM alone (500 mg three times daily), glucosamine alone (500 mg three times daily), or MSM + glucosamine (500 mg each, three times daily). Using a number of analytical tools that measured joint functionality, comfort, and quality of life related to joint health, the researchers found that the MSM and glucosamine groups experienced significant support for joint health, whereas the placebo group experienced no such benefits. Additionally, the combination of MSM + glucosamine was significantly better at promoting joint comfort and functional ability than either taken alone.

MSM could serve as a source of sulfur to support the maintenance and formation of cartilage, thereby supporting knee joint health.10 Its two methyl groups could be valuable to its actions, being necessary for tissue repair and maintenance. Its molecular structure suggests it could also have redox (electronic catalytic) properties that would facilitate antioxidant or other human benefits.

Oxidative stress is a term used to describe negative imbalance between production of reactive oxygen species (ROS) and the body’s antioxidant capacities. Strenuous exercise have the potential to create an uptick of ROS, and subsequently oxidative stress.11 Human and animal studies suggest that taking MSM prior to exercise may help to ease oxidative stress, especially in individuals not accustomed to the stress of exercise.12, 13.

In an exploratory trial of eight healthy men accustomed to a moderate amount of exercise (no more than 2.5 hours per week), the effect of MSM on antioxidant capacity after exercise was investigated. Half of the participants were given 1.5 grams of OptiMSM per day, and the other half 3.0 grams per day. Both groups took the MSM for 30 days, and were instructed to split their daily dose in order to take half of it in the morning and half in the evening. On two exercise test days (before and after 28 days of MSM consumption), participants took their morning MSM dose immediately prior to eating a standardized breakfast, then performed 18 sets of a standardized exercise. A statistically significant increase in blood antioxidant capacity following exercise was reported in the group taking 3 grams MSM daily, as measured by the well-accepted Trolox Equivalent Antioxidant Capacity assay.12.

MSM has been suggested to support healthy immune function through antioxidant actions. Neutrophils, the most abundant white blood cells in the body, routinely release free radicals crucial to their immune activities; this can be a double-edged sword, as excessive free radical generation contributes to oxidative stress. Laboratory research suggests MSM can help regulate free radical production by neutrophils.14 In mice macrophage (immune) cells, MSM was shown to down-regulate overactive immune factors without being toxic to the cells.15 In a mouse model examining joint health, MSM dissolved in the drinking water influenced immune function in a way that significantly supported joint structure and function when compared to mice in a control group.16.

MSM’s benefits for human immune function were studied in an open-label clinical trial. A total 50 men and women were given OptiMSM, 2.6 grams per day for 30 days.17 The MSM was given as four 650 mg capsules-two in the morning and two in the afternoon-each day. Immune function was measured by questionnaire, which included three subsections of questions about upper respiratory health (the head, eyes, nose, and throat), lower respiratory health (the lungs and chest), and energy level. The data suggested MSM produced clinically significant support for the upper respiratory system after one week, the lower respiratory system after three weeks, and enhanced energy levels after two weeks. These benefits continued into the fourth and final week of the study. A subset of 16 participants who experienced the least benefit from the MSM were selected to continue taking OptiMSM for an additional 14 days, but at the higher dose of 5.2 grams per day. These individuals then reported experiencing significantly enhanced energy levels and superior overall respiratory scores.

While new research is exploring the potential of methylsulfonylmethane in promoting the maintenance of GI health18 and bone health,19 the current clinical evidence shows MSM provides meaningful support for the joints, for immune function, and for the body’s antioxidant and overall protective capacities. MSM is proven very safe to take, very well tolerated, and effective at intakes as high as 6000 mg (6 grams) per day.